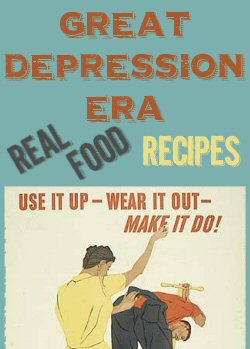 I am a big supporter of eating “real” food. If your great-grandmother would have recognized the foods you put in your grocery cart, you are eating “real” traditional food. One of the things I have researched for my meal planning is Great Depression era and WWI recipes. Too many recipes today are based on canned cream-of-blech soup. At this point these foods were just starting to creep into recipes. You can make your own substitutions for these convenience foods, but I find it interesting to look at heirloom recipes.

If your great-grandmother would have recognized the foods you put in your grocery cart, you are eating “real” food. http://t.co/Sr0Lzw395Z

Here are some good sources of Great Depression Era and World War I recipes:

About.com Frugal Living Depression Era recipes
Best War Time Recipes 1918 from Ancestry.com’s Military Records on RootsWeb
Depression Era Recipes collection from Tish on Food.com
The Doughboy Cookbook from WorldWar1.com
Foods That Will Win the War and How to Cook Them on Project Gutenburg
Food Will Win The War Pamphlets from Project Muse, War Economy in Food may be from this series)
Great Depression Cooking with Clara This is a series of videos of a woman cooking some of her recipes, and she has released a book called Clara’s Kitchen

This is a good book of basic recipes, including recipes for basics like condiments (Amazon link)

Hard Times Cookbook with Back to Basics Great Depression Cooking

Stories and Recipes of the Great Depression of the 1930’s and More From Your Kitchen Today, Vol.

This book is definitely an interesting read. This has very simple recipes but some are a little confusing, they make sense if you know what you’re doing. The stories are entertaining. (Amazon link)

Want to learn how to stretch food like your great grandma? Try one of my More With Less Meal Plans.

What recipe has your family handed down from the Depression?

*Also see our Use It Up Adage Printable Use it up, wear it out, make it do, do without OR 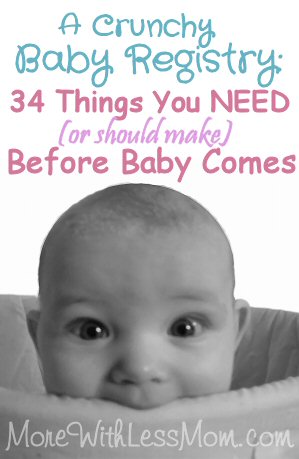 Crunchy Baby Registry: 34 Things You Need or Should Make Before Baby Comes OR